The Sky is Not the Limit

Self-love is a journey not a destination.

On July 29, 2017, I took to the sky for the first time. My whole world changed the moment I descended out of the plane. It was literally a leap of faith, a journey into the unknown and possibly unforgiving atmosphere. Everything that was on my mind – fear, doubt, anxiety – was instantly replaced with pure joy and serenity. It was a moment in which I felt so connected to myself, my thoughts, and the world around me. All I had was the present moment. Nothing else mattered. Nothing else was even thought of. It was a turning point in my life.

A Little About Me

Up until this past year, I’ve had the tendency to remain within my comfort zone. Sometimes it was just easier, sometimes it was because of my debilitatingly low self-esteem and fear of failure, and sometimes it was perfectly acceptable because it was what I wanted. When I accepted that it was a problem in my life, something that was halting my progression, I took immediate action. That is not to say that this transformation has happened overnight; it has been over a year and it is not anywhere close to being finished, it may never be, but I have not given up.

That in itself is a huge step for me. I have given up on myself so easily more times than I can count. I have not even given myself the chance to give up even more times. Fear of failure and crippling self-doubt were always with me. Even when I did give myself the chance, I constantly spoke badly about myself – “You’re wasting your time,” “You don’t have what it takes,” “You’re silly for even trying” – were common phrases I told myself. Sure, I believed in the power of positive thinking, but I didn’t believe it would work for me. I was so far down, so helpless, so pathetic. This is but a glimpse at the foundation from which I came to rise from; the broken foundation which ended up evolving into the platform that propelled me forward.

I have a decent handful of fears, but the one that forever remains within the top 3 is heights. Shaky knees, sweaty palms, dry mouth, and anxiety are common side effects of looking up at tall buildings or looking down as you climb to the top of a water slide. I was absolutely sick to my stomach at the thought of being 13,500 feet above ground. What would happen if I passed out, peed, or threw up? (I actually asked my tandem instructor this. He said it had happened before. Luckily none of those things happened with me.) I had just moved back to Florida. I was going through a separation. I was starting over in many ways, but something convinced me to do it. The voice that had been silenced for so long by anxiety and fear was finally calling out, telling me if I didn’t take this risk I would regret it forever. It was something I had always wanted to do, I was just scared.

I signed up early and only had to wait about 30 minutes to go up. That gave me just enough time to pee excessively, become sick to my stomach, and question my decision, but I didn’t back out. I met my instructor, he summarized the events that would happen, we put on our gear, and boarded the plane. From the outside of the plane, it doesn’t possibly look like it could hold over 20 people. However, you essentially sit with your legs wide and someone sits between them, maximizing the space, and causing me to sweat just a bit more. The bucking of seatbelts, the sounds of the engine, and the immense fear were deafening, and it was almost all at once that I chose to let go. I chose to breathe in life, chance, and adventure and breathe out fear, self-doubt, and pain. So, we slid from the back of the plane to the door and I looked out. Breathtaking. Patches of beautiful, earthly colors were displayed below me, and all I wanted was to be among them.

You know that feeling of your stomach dropping when you pummel down the track on a rollercoaster? That was the feeling I was so scared would happen. Everyone I asked said you do not feel the drop, but I still was not entirely convinced. You do not feel the drop in your stomach. You simply glide into the wind and fly. It was so fast, so loud, and so exhilarating. I almost couldn’t fully comprehend what was happening, what I was doing. I was screaming, but I wasn’t screaming from fear, I was screaming because I did it. I left fear on the ground and took to the sky. The sky was not my limit, my mind was.

Under the canopy it was so quiet and peaceful. I was over the coast of Sebastian, Florida, so the views below me were lush greenery and sparking oceans, around me were clouds and blue sky, and above me was the shining sun and colorful canopy. I felt like I belonged, like I was always destined for that moment. When I arrived on the ground I could not stop smiling. I rode that high all weekend long. I felt like a badass because I conquered a huge fear. I felt so proud of myself for being stronger than my self-doubt and anxiety. 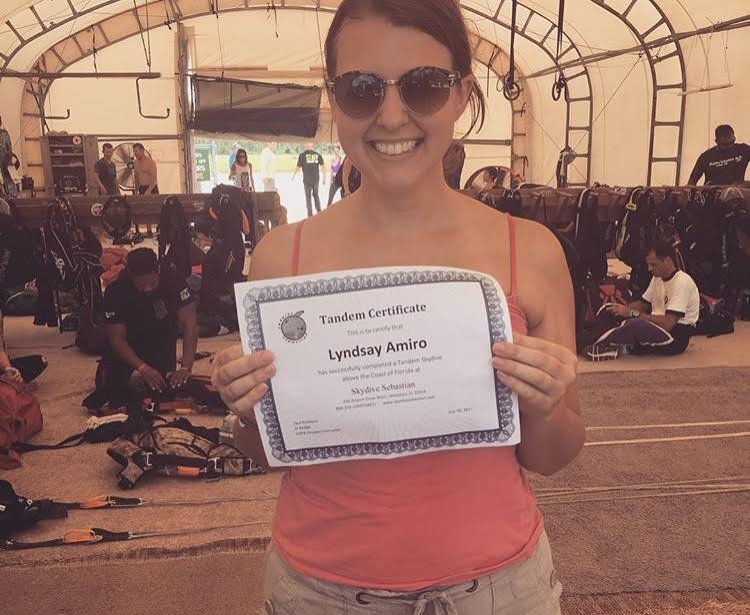 This moment in and of itself did not change my life, but it was the catalyst for change. This moment stood for something, something I thought may never happen. I had gone all in and come out even better than I was before. I took a chance, a risk, a leap of faith and I succeeded. This moment has sent me on a journey of health, wellness, and self-love. Over the past year so much has happened on my journey to propel me forward and keep me on my way. Some days it feels natural, others it is hard work, but, like everything else, it is a step into the unknown.

Am I Worth It?

Self-love is a journey not a destination.

Empire State of Mind - for a Weekend
Kayla Hodges